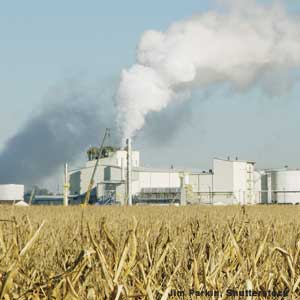 The explosive growth of U.S. ethanol production is being felt by nearly every aspect of the field crops sector—domestic demand, exports, prices, and the allocation of acreage among crops—as well as the livestock sector, farm income, government payments, and food prices. Additionally, issues have been raised regarding possible effects on natural resources resulting from the ethanol expansion and changes in farmers’ cropping choices. Adjustments in the agricultural sector to this strong demand are underway and will continue as interest builds in renewable sources of energy to lessen dependence on foreign oil.

Market conditions and policy factors are fueling the rising interest in ethanol. A rapid runup of oil prices over the past several years has combined with provisions of the Energy Policy Act of 2005 and already existing Federal and State biofuel programs to provide economic incentives for an expansion of U.S. ethanol production.

Crude oil prices, which averaged less than $20 a barrel (refiners’ acquisition cost for imports) in the 1990s, reached almost $68 in summer 2006, and averaged $59 for the year. This increase in prices reflects rising global demand for crude oil resulting from strong world economic growth, including rapid manufacturing gains in China and India. Further growth in global economic activity will continue to drive up world demand for oil, particularly in highly energy-dependent economies in Asia. Although the increase in demand is likely to be partly offset by future oil discoveries, new technologies for finding and extracting oil, and continued expansion and improvement in renewable energy, oil prices are expected to remain high by historical standards.

Further contributing to the interest in ethanol, the Energy Policy Act of 2005 mandated that renewable fuel use in gasoline (with credits for biodiesel) reach 7.5 billion gallons by calendar year 2012, with gains in later years in line with growth in the volume of gasoline “sold or introduced into commerce.” Additionally, the legislation did not provide liability protection for effects of methyl tertiary butyl ether (MTBE), an oxygenating gasoline additive that has been found to contaminate drinking water. As a result, blenders have sharply reduced use of MTBE and switched to ethanol as a fuel additive.

Federal tax laws also provide incentives for biofuels. Under current law, blenders can receive tax credits equal to 51 cents per gallon of ethanol blended with gasoline. This makes ethanol more economical to produce, as part of that credit is, in effect, passed back from blenders to ethanol producers. Additionally, ethanol imports are subject to a tariff of 54 cents per gallon, although imports from designated Central American and Caribbean countries are duty-free up to a maximum of 7 percent of the U.S. ethanol market.

In response to these strong incentives, ethanol production capacity has risen sharply over the past year as new plants have been built or are under construction. With completion of the plants currently under construction, production capacity in the industry will exceed 12 billion gallons within a few years. Ethanol production is expected to be well above the renewable fuel standard mandated in the 2005 Energy Policy Act. Although the ethanol expansion is then expected to slow somewhat, even with the industry operating at less than full capacity, USDA’s 2007 long-term projections show ethanol production growing to more than 12 billion gallons by the middle of the next decade, assuming no changes in policy or technology.

Ethanol Relatively Small in the Gasoline Market but Large in Agriculture

Most of the current expansion in ethanol production uses corn as the feedstock. Although cellulosic-based production of renewable fuels holds some longer-term promise, much research is needed to make it commercially economical and expand beyond the 250-million-gallon minimum specified for 2013 in the Energy Policy Act of 2005.

Ethanol accounts for a small share in the overall gasoline market, but its importance to the corn market is relatively large. In 2006, ethanol (by volume) represented about 3.5 percent of motor vehicle gasoline supplies in the United States. But 14 percent of the U.S. corn crop went to ethanol production, a share projected to grow to more than 30 percent by 2009/10 and to remain at that level in subsequent years. Even so, by the middle of the next decade, ethanol production (by volume) is expected to represent less than 8 percent of annual gasoline use in the United States. Thus, while the growth in corn-based ethanol can contribute to the Nation’s fuel supply, that contribution is relatively small in the gasoline market but can have large effects in the agricultural sector.

In Agricultural Markets, Corn To Be Affected Most Directly…

The rapid expansion in ethanol production will have far-reaching effects throughout the agricultural sector. The corn market is being affected directly by the increase in ethanol production. As the ethanol industry absorbs a larger share of the corn crop, higher prices will affect domestic use and exports, providing for more intense demand competition between domestic industries and foreign buyers of feed grains.

Increased use of U.S. corn for ethanol production and higher corn prices also will have important implications for global trade and international markets. The United States typically accounts for 60-70 percent of world corn exports; however, higher corn prices are projected to reduce this share to 55-60 percent over much of the next decade—a result of reductions in foreign demand and increases in foreign production.

Higher corn prices also will affect farmers’ production decisions, as higher producer returns provide economic incentives to increase corn acreage. Much of this increase is likely to occur as farmers adjust crop rotations between corn and soybeans. Other sources of land for potential increased corn plantings include cropland used as pasture, land in fallow, acreage returning to production from expiring Conservation Reserve Program (CRP) contracts, and shifts from other crops, such as cotton. According to USDA’s Acreage report, (June 29, 2007), farmers planted nearly 93 million acres to corn this year, up over 14 million acres, or 18.6 percent, from 2006.

On balance, increased use of corn to produce ethanol is projected to result in higher corn prices, which will trigger reductions in other uses and increases in supplies to bring the corn market into equilibrium. Nonetheless, stronger ethanol demand will result in lower carryover stocks of corn. At the same time, ethanol demand is very inelastic (unresponsive to price changes) in the range of prices expected over the next decade and relative to other major demands for corn, such as feed use and exports. Thus, overall demand in the corn sector is projected to become more inelastic as ethanol production grows. In combination, these factors will make the corn market more vulnerable to shocks, such as production shortfalls due to weather, pests, or other factors. Low stocks provide limited buffers to shocks. As demand for corn becomes more inelastic, a greater change in market prices would be needed in response to a shock to bring the market to equilibrium. Thus, overall price variability and market volatility in the agricultural sector are likely to increase.

…With Other Crops Affected Indirectly

The jump in corn prices will initially favor corn production over other crops. Soybeans compete most directly with corn and on the largest amount of land. Thus, soybean plantings and production will likely take the brunt of the effect of the expansion in corn plantings and will correspondingly decline. In the Corn Belt, where producers frequently rotate crops, with corn planted one year and soybeans the next, some of the acreage shift can occur through changes in rotational practices. For example, the rotation might be changed to planting corn for 2 successive years, with soybeans planted every third year. Based on USDA’s Acreage report, much of the 2007 increase in U.S. corn acreage will come from reduced soybean plantings, which are down more than 11 million acres (15 percent) from 2006.

In some areas, plantings for other crops that compete with corn or soybeans for acreage are likewise projected to decline. For example, cotton plantings for 2007 were down more than 4 million acres from the previous year in USDA’s Acreage report.

Higher corn prices reduce the profitability of meat production because of corn’s importance to the livestock sector as an animal feed. In response, red meat production is projected to decline in the United States and growth in poultry output is likely to slow. The impact of higher corn prices and feed costs is expected to be partially offset by the greater availability of distillers’ grains (from ethanol production) as a substitute source for feed.

According to USDA projections, based on the different uses among the livestock species and a number of other important underlying assumptions, each bushel of corn used to produce ethanol results, on aggregate, in a reduction of about a fifth of a bushel of direct corn feeding, due to the use of distillers’ grains in rations. However, the substitution of distillers’ grains in feed rations is expected to bring only a small reduction in soybean meal use. Beef cattle are assumed to be the largest users of distillers’ grains, and beef cattle rations typically use urea as the protein source rather than soybean meal.

Overall, ethanol expansion will boost net farm income. Higher commodity prices over the next several years, particularly for corn and soybeans, are projected to bring large increases in total farm cash receipts. But to some extent, these gains are expected to be offset by somewhat higher production expenses for inputs such as seed, fertilizer, and livestock feed.

Higher prices for corn and other crops also mean smaller government payments under current farm commodity programs, particularly price-sensitive marketing loan benefits and counter-cyclical payments. In contrast, with higher crop prices, use of land for production becomes more valuable, so new rental rates for land enrolled in the CRP are likely to rise. As a result, conservation payments and fixed direct payments under the 2002 Farm Act (which do not change with market prices) are projected to account for a larger share of total direct government payments, assuming no changes in policy.

While the ethanol boom can be expected to bring higher incomes to farmers and reduce government outlays for farm programs, it will also most likely mean higher food prices for consumers. Retail price increases for red meats, poultry, and eggs are projected to exceed the general inflation rate in 2008-10, as the livestock sector adjusts to higher feed costs. As a result, overall retail food prices would rise faster than the general inflation rate in those years.

What’s the Difference Between Projections and Forecasts?

The discussion presented in this article is based on USDA’s long-term agricultural projections to 2016, released in February 2007. These projections, however, are not forecasts for the future.

Projections are based on a specific set of assumptions, such as a continuation of current farm legislation. These conditioning assumptions are usually designed to provide a neutral backdrop for the projections to allow the analyses to focus on key long-term underlying factors. For example, projections would typically assume longrun trend growth rates for key macroeconomic variables rather than forecasting the timing of business cycles. And normal weather with trend growth for crop yields would be assumed for projections. Thus, USDA’s long-term projections represent one plausible scenario for the next 10 years.

In contrast, forecasts focus on predicting actual outcomes. Forecasts incorporate additional information that departs from the neutral assumptions of the long-term projections and thus can produce different results. For example, forecasters may consider what will happen under pending farm legislation if they believe the legislation will be enacted. A forecast may also predict the timing of business cycles in the general economy.

This article hasn't been commented yet.